Computer lab in the U-M Computer and Video Game Archive. The Archive has been working on a new frontier in preservation initiatives. Image credit: Eric Bronson, Michigan Photography

On a normal day, during a normal year, the University of Michigan Library’s popular Computer & Video Game Archive is abuzz with activity.

Since its establishment in the 1970s, the accessible, multipurpose archive has offered students, staff, faculty and the general public a space to take a break, study, conduct research or play games among friends.

CVGA manager Val Waldron says the archive has remained quiet this year due to the ongoing coronavirus pandemic, but there is a silver lining. 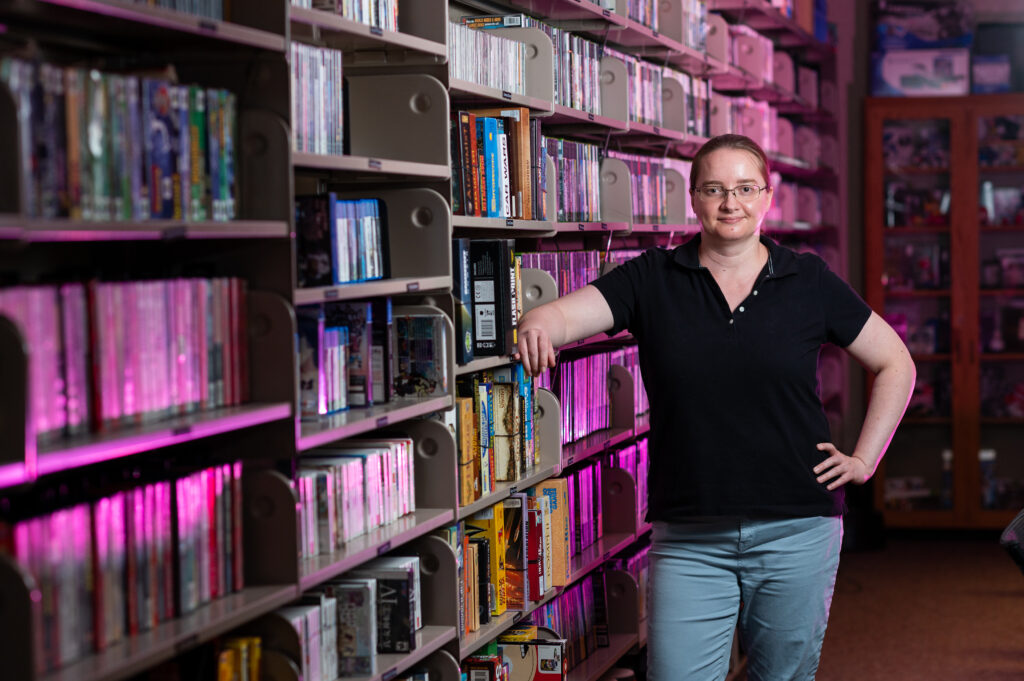 Val Waldron is the manager of the Computer and Video Game Archive is a part of the Learning & Teaching division of the U-M Library. Image credit: Eric Bronson, Michigan Photography 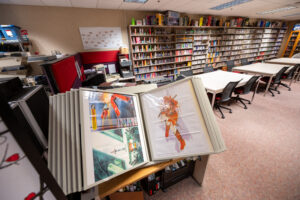 Print materials and promotional posters that come with the video, board and card games. Image credit: Eric Bronson, Michigan Photography

“Between class sessions, helping students look at particular games or faculty members with research, there’s always a lot going on at the CVGA, and this is the first time that we have ever been able to completely shift our focus from user access to the preservation portion of our mission,” she said.

Located in the basement of the Duderstadt Center on U-M’s North Campus, the CVGA has continued to maintain its dual mission of providing users access to their game collection while also preserving them for future research and scholarship. The interactive archive includes a variety of video, board and card games, as well as gaming consoles, microcomputers, displays, game controllers, supporting print materials and more. 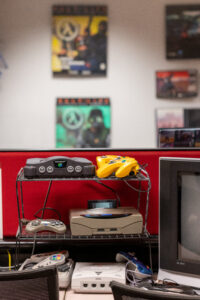 A corner of nostalgic video games in the Video Game Archive, such as the Nintendo 64, Sega Genesis and Sega Dreamcast. Image credit: Eric Bronson, Michigan Photography

From the Atari 2600 (1977) and the Nintendo Entertainment System (1985) to the first four out of five PlayStation consoles—to name just a few—visitors can choose from more than 60 unique systems and 8,000 games available for research and play.

Just ahead of the shutdown, Waldron and her colleagues had already begun to work with the U-M Library’s Digital Preservation Lab to create a process that would allow the archival of each game’s digital files and supporting materials, including game manuals, reference guides, patches, maps, etc., to be stored in a virtual “bag” using the Bagger application. The bags will be then stored and connected to the game’s record in the library catalog.

The digital archive of game files are not accessible or playable by the general public, but will be preserved in a dark archive as backup copies in case the original files somehow become corrupted.

U-M librarian David Carter serves as a video game archivist, comics librarian and reference services co-coordinator. He explains that, as an open and usable archive with a primary mission of research and curricular support, their collection experiences regular wear and tear. Antithetical to the preservation process, the physical games and magnetic media degrade with each use as well as simply with time.

“What we’ve been working on is taking the digital and physical media and figuring out the best way to archive them in a variety of formats so that we can ensure that they stay safe,” he said. “This way, if our physical copies do degrade or become corrupt, we’ll have a digital backup in its place for people to play.”

Since the pandemic began, CVGA staff have archived more than 1,000 games in the collection, and Waldron says that this is just the beginning.

“For now, we’ve just been taking care of the low-hanging fruit, starting with born-digital PC games—things that we’re familiar with—and then working back through the aging media formats before looking into the best way to image other console games, which will involve more complex processes,” she said.

A race against time

According to Waldron, older PC games have a lot of game patches, updates and workarounds that are hanging out on the internet on obscure websites that may not be there for much longer. Prioritizing these games means searching for all the components and contents that make the game run—or at least run well.

Waldron says while there are other archives that are working on preservation initiatives, those looking to preserve an entire game rather than just the software are few and far between.

“There are a few experts or specialists at other universities, but there isn’t a lot of known work or discussion around the formal archival process for these games,” she said. 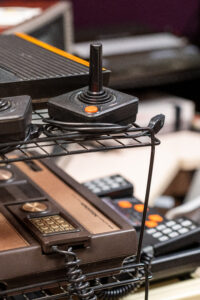 The Video Game Archive makes a wide range of over 50 consoles available for research and play, pictured here is the classic Atari 2600 (top), and the Intellivision (bottom). Image credit: Eric Bronson, Michigan Photography

A much more complicated and new procedure than archiving text documents from floppy disks, game preservation can seem like a daunting task for a number of reasons—from having a diverse game collection requiring different preservation methods to not having the technology or resources.

Because it’s such an unfamiliar process, Carter says that it is hard to know what other people are doing.

“We’re all sort of doing this work on our own for the time being, and part of what we’re trying to do is draw attention to game preservation on this professional level,” he said.

In the future, the staff hopes that more people will become involved to create more demand for the proper tools and that they will be able to collaborate with others to tackle archiving more complicated games and consoles with collective wisdom. For now, they’ll continue forging the best processes and creating workflows so that student interns can assist in prioritizing the old while archiving the ever-expanding CVGA collection.

The CVGA will reopen Aug. 31 by reservation only for U-M staff, students and faculty with valid Mcard or picture ID. More about the collection, including its current policies related to COVID-19 and instructions for general public access, can be found on the CVGA website.