Back in June, Microsoft officially released its latest system, Windows 11. This new system comes with a couple of upgrades and new features. However, there were some expectations that Windows 11 did not bring at the time of its launch. Of course, the system could not have “everything” that users expect. Prior to the launch of Windows 11, there were multiple reports that this system will Microsoft will add support for Android apps. However, to the disappointment of many users, this feature did not arrive with Windows 11. Nevertheless, this does not mean that Windows 11 will not support Android apps.

A recent report from Chinese social network Billibilli (via XDA-Developers) shows multiple screenshots which reveals Android apps running on Windows. According to the report, in the coming months, Windows insiders will be able to test this feature. Presently, these screens are no longer available on the original source. Nevertheless, the screenshot shows two Android social apps running on Windows 11. Specifically, WeChat can be clearly seen on the taskbar of Windows 11. The screenshots also show different interfaces of the WeChat app on the Windows 11 system. 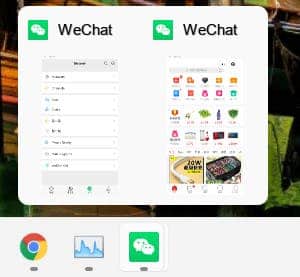 According to XDA, “Multi-instance support for Android apps in Windows 11 would be a big deal”. The feature is quite new and it will be worth trying for many Android smartphones. As of now, we do not have much information on the workability of this app. For the multiple app instances, it could be a programmable feature.

Android apps on Windows will work like Windows app

Just like other Windows apps, the Android apps on the Windows system will support features like resizing, pinning to the Start menu or taskbar, and other features. Furthermore, these apps will support the “mice, keyboard, touch, and so on”. XDA, however, claims that there is no confirmation on whether or not this app will support webcam for video.

In the meantime, these leaks are all we have. Microsft has been very silent with regard to this compatibility. However, considering the appearance of the Windows Subsystem for Android on Microsoft Store as well as the benchmarks, there is hope that Android apps on Windows 11 will launch soon.